Life is a Smorgasbord 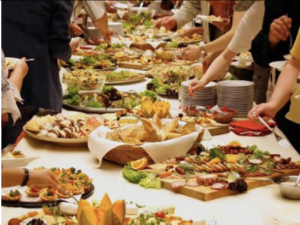 At certain times in my life I have found it easy to be stuck in patterns, causing me to forget that there are many other choices I could be making. Judgment was taught and learned so well that fear of moving out of those patterns had kept me stagnant for years, even when they were painful. Moving was just too scary, the fear of new failure was too strong. Though I classified where I was as failure, it was a known failure, and no matter how unrewarding, unfulfilling, unloving it proved to be, I knew its pains and had become comfortably numb to it.

The need to feel I was moving in the right direction, making the right choices, and doing the right thing was so foreboding that it kept me clinging to what I knew. The unknown was just too scary to venture into, too filled with the possibility of embarrassment, guilt, shame and new failure. Surely there would be someone there to judge me, though mostly it was just myself. The knowledge of what I don’t know caused me to judge myself harshly for doing it wrong before even having done it. These were just a few things that I found that had kept me stuck in situations that did not support or feed me in a positive light.

I would have dreams that took me far and away from my life but creating new habits to take me there would sometimes be excruciating. Going up against the trepidation or the downright resistance, often was more than I could do. Or so I thought it was. The truth is that we are all capable of pushing past our fears, our excuses, our hesitation and resistance. We just must begin to move in that direction. I found it much easier to move forward when I gave myself the permission to fail. What??? Yes, it’s okay if I don’t know how or where to move, JUST MOVE in the direction of more love! If I fall may I learn to roll so that I don’t hurt myself.

I like to look at life now as a Smorgasbord. How do I know if I will like it or not if I haven’t tried it? So, if it looks, and feels appealing why not give it a go? If I don’t like it, I can stop eating it, doing it or allowing it in my life. I can bring my focus onto something else. By trying new things, I may just end up finding something that feeds and fills me with more joy, more love and more success than I have ever known. But if I don’t move, it won’t allow for a new experience, and I may never find it and may never know all the love that the universe has for me.

Now I make new habits, try new things, allow myself to make new choices on what I like and don’t like, then choose not to have things in my life that don’t make me happy. I treat myself as lovingly as I would a two-year-old who is learning to walk. I would encourage, not discourage them when they first stood up and fell. I would cheer them on, tell them how brave, courageous and strong they were for standing in the first place. And how excited I am for them taking their first step, EVEN when they fall. I choose to be there for myself as I would for them. It’s new to me too. Just because I’ve grown up doesn’t mean I don’t deserve the same love and encouragement. I do deserve it, and I’m not waiting for someone else to give it to me, I give it to myself. I am worthy, even if sometimes I don’t remember it.

My friend Lazaris says it in a much more poignant way.

This entry was posted in Blog. Bookmark the permalink.